We’d love to hear from you. Leave us a review!

Omg they are absolutely stunning, I mean myself and my family were brought to tears. The two of them have passed on, so the details on the two are mind blowing. I swear pictures do not do the details justice.
Thank you so so so very much Cuddle Clones for doing such an amazing job. 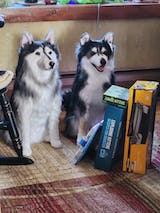 C
Custom Pet Art Blanket Carolyn Schaeperkoetter
Bringing my Baby Back to Me.

My sweet Blueberry died Oct 11 2022. I decided to honor her with a Cuddle Clone Plush and blanket with her likeness on it. So happy to have her spirit still with us and a reminder that she is not forgotten. Thank you, Cuddle Clones for all you do.

I am so elated with my Cuddle Clone. My eyes welled up with tears of joy when I first saw her. I've named her "Krash 2.0" and "O.G. Krash" just loves "herself" too. It is so very comforting to have an everlasting "Krash". I highly recommend Cuddle Clones to all fur families. 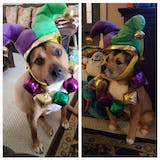 We had our dog Murphy for one month short of 15 years. He passed away unexpectedly just before Christmas. We wanted to have something other than photos of him and came across Cuddle Clones on the internet. We went through the order process and thought it was very thorough to order a likeness of the dog. He had a unique black and white coat and the staff did a great job to duplicate his features. While we can't replace his wonderful personality we can have this physical reminder of how special he was to us. We obviously could not compare the clone to Murphy but used a blanket we ordered from another source to show him off. 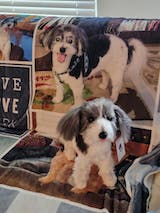 My kitty Bunny recently got a cancer diagnosis and I knew a wanted a cuddle clone. I also knew I wanted it it before she left me. It came much quicker than the 8 weeks. I received it in about 3. The feet and the tail are spot on. I love the name tag. The body coloring is good. I think the face is a decent interpretation of her. I do have to say my husband finds it creepy. Opening the package, the chemical smell is overwhelming. I do think there should be a note about it. I rubbed her down with dryer sheets and after a couple days it subsided. Overall I’m happy with my purchase and would definitely recommend. 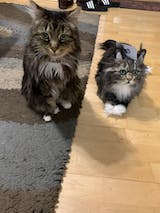 My daughter had Joey for 17 years, almost exactly half of her life! He passed last year leaving her devastated! I ordered him from pictures I stole from her Facebook page and she was absolutely thrilled & shocked at how exact his clone was!!! This is my 3rd purchase and they have all been exact!! Joey was a fluffy guy and it was amazing how he was perfectly captured. 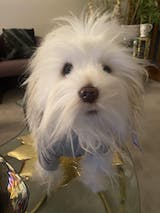 I purchased this for myself for Christmas and never opened it once it arrived weeks before Christmas because I wanted it to be a surprise. What a LOVELY one it was!!! I was SO happy to see Buttercup’s face come to life. I miss her so much!! This really touched my heart! 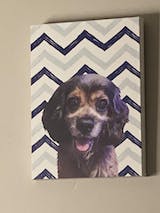 Going to miss her forever but having this reminder of her warms my heart every time I pass by it.

We ordered a Cuddle Clone for my 12-year-old, who asked for one after we had to have our elderly and beloved dog put to sleep. We ordered in November, and I told him it would probably arrive after Christmas, but it arrived in less than 3 weeks (just regular shipping), and is beautiful; Cuddle Clones even incorporated physical details about our dog that I didn't have a photo off for reference. Our son was thrilled and it's a lovely and adorable tribute to a lovely and adorable dog. 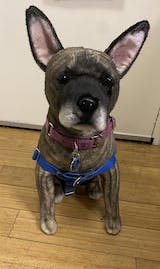 I purchased this blanket for my daughter for Christmas of her dog she lost her few years ago. She loved it! It's a constant reminder of her sweet boy!! 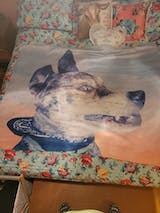 This was a Christmas gift for my Mom. The dog was a clone! It is so awesome. My mom loved it! It is so much better as a gift before loosing your beloved pet. Thank you so much for an awesome job. The caregiver actually thought it was the real dog!

I got these for my mother-in-law. She absolutely loves them! They arrived quickly and great quality. I would definitely recommend. 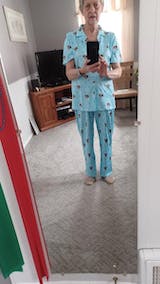 Absolutely love my cuddle clone of my Muffin! I lost my brother Muffin a few months ago and felt very lonely without my big gentle puff ball in my arms or on my lap. So I ordered a CC of my Muffin and the first one I ordered came in only 2 weeks, which was much faster than what I expected. The first cuddle clone of Muffin was really good quality and got all the minor details correct,, but not really a look alike of him. I was then contacted by the company's customer care service and they offered me a free remake of my brother. I agreed and sent them further instructions on what to change. This one took a bit longer to come but it was definitely worth the wait, it truly looked like my sweet boy. Everything from the general look all the way down to the most minor detail was perfect! His stubby legs, small face and fur colour were spot on. So thank you Cuddle Clones, for your great quality services and empathetic employees for helping me fill the void, at least physically, of my Muffin. 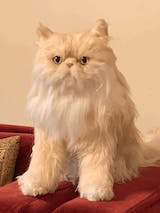 Thank you Cuddle Clones for my replica of my late pup. The details are just incredible!! 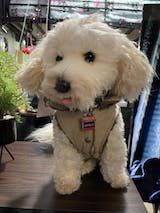 Surprised my friend with a cuddleclone of her dog and she loved it! Says it looked just like her dog ! They did a great job matching the color and texture ! Thank you so much! You’re amazing at what you do! 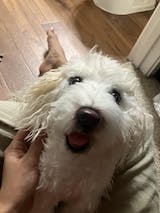 I decided to order this for myself after losing my bestie of nearly 14 years. I love it so much! It looks so real, and the quality is just astounding. Even my cat MooShu enjoys sitting next to his buddy again 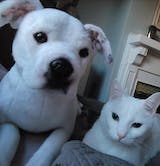 I lost my beloved Finnegan one week after my 50th birthday in April 2020, at the same time the pandemic began and everything was locked down, and I had just found out I had cancer. It was the worst time to lose my best friend. That year was hard, and all the things at once (plus the fact he'd been so young, only 6, he died of congenital heart disease, nothing to be done about it), made my grief so much stronger than when I've lost other cats before him. I wept at least once every day for a year. My new cats are wonderful characters, but they are not cuddly huggers like Finnegan was. When I found out about Cuddle Clones, I was impressed by everyone's photos, so I decided to go for it. During the ordering process there were warnings that it could take at least 8 weeks to receive my order, especially as it was just heading into the holiday season. I was fine with that, but was blown away when I received it within 2 and a half weeks! The communications and support was excellent, informative and prompt.
They did such a good job - they got his colouring just right, and I loved the little details like the little hairs that cats have going across their ears in the front, and the little 'eyebrow' hairs that stick up. It is such high quality, beautifully constructed. The only surprise was that it's quite stiff, and not soft and cuddly like a normal stuffed toy as I was expecting, more like taxidermy Lol, but that's okay, I got over it. Just a heads up in case anyone is expecting something more pliable like I was.
I love being able to have 'Finnegan' sitting in his accustomed places again. Thank you Cuddle Clones. 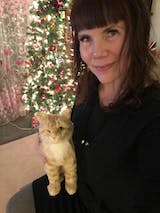 Our 14 year old died suddenly one week before Christmas. The holidays weren’t the same without her. The Cuddle Clone of her just arrived and is a perfect reminder that our sweet girl will always be with us in spirit! ❤️ 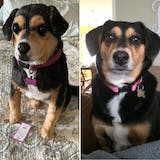 Oh my gosh … our Cuddle Clone is absolutely identical to our dog George! He is a Merle Bulldog with unique markings on his chest and back and every single marking on our Clone matches!! We are beyond impressed! George loves it too! Thank you!! 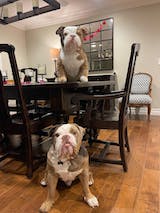 Dozer was my wife's "person" and he had passed several years ago. Thanks to Cuddle Clones, Dozer can now join us and listen to my wife's thoughts and prayers as he once did. 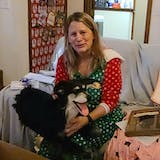 I think this is a wonderful likeness of my beloved best friend, Georgette! My only complaint is they missed the brown color on her nose. Overall, I am very happy and I love her so much! ❤️❤️ 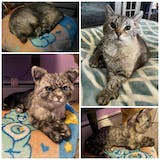 We lost our beloved dog Howie right after Mothers Day. We were devastated. All we had left were our pictures. I decided to get my husband a cuddle clone for his birthday which was in January. I was skeptical but once it arrived I was pleasantly surprised. They did a fantastic job 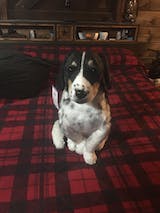 My mother-in-law was so sad when her Jack passed, this cuddle clone made her day! She couldn’t stop smiling and loved how his special features like 3 legs/tongue out, were shown! Thanks again cuddle clones for making “jumping Jack” something she can hold once again. 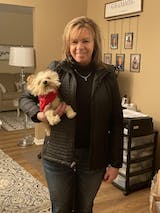 This is my Hoss, I was so worried it would be a total train wreck but I was pleasantly surprised at how well he turned out. Is the cuddle clone an exact match… no but I would say almost. Hoss was my soul dog and it gives me comfort seeing this replica of him. I would definitely get another one. I still have another dog and I am probably going to get one made of him, I will probably get his before he crosses the rainbow bridge. Thank you Cuddle Clones!!!! 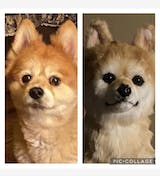 I love my Chloe cuddle clone! My sweet Chloe passed away earlier this month and a friend suggested I get a cuddle clone of her. Couldn’t be happier! It’s like a part of her is still with me. I’m not sure what my other kitties think of it as evidenced by the picture! 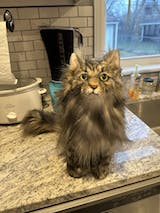