A custom stuffed animal is the purr-fect gift for ANY pet lover!! Handcrafted from the highest quality faux fur, our custom plush Cuddle Clones capture all of the physical details and unique features of your pet! And, we aren’t talking just dogs and cats – we’ll clone ANY of your beloved animals.

Starting at /mo with .

GET YOUR CUDDLE CLONE

Here’s How We Do It

Upload Photos of Your Pet

Tell Us Your Pet's Unique Characteristics

A few of our satisfied customers!

First off, thank you all so much for the work you all do to help people like me with the grief process. It’s been 3 years since Kimber passed away and I’m just now getting to do this. Missing her so much and having my stuffed Kimber to hug and hold makes it so much easier. I simply love my Kimber that you all made for me.. There are just not enough words to express how happy and satisfied I am with my Kimber. The only thing I can do, is to continue to tell people about all of you and what you all can do. Again, thank you from the bottom of my heart..

I have been waiting in anticipation for the arrival of my Finian who was put to rest just four weeks ago. I opted to pay extra so that he was shipped within four weeks rather than the standard eight and he arrived within that time frame.
Opening the box I was taken back for a moment, I could just see his back and I swear it was Finian himself. He is a perfect clone. The colour and coat pattern is so mirrored I can't believe it. You have done such amazing work. I want you to make sure that you give the actual person who cloned Finian a huge hug for me. They are so talented, I couldn't be happier.
The photo's I have uploaded doesn't do it justice, it honestly is so perfect in real life. I have been startled three times already where I walk into the room and see him and forget and freak out cause at that second I think its Finian.

Thank you Cuddle Clones so much, you have made a piece of my heart whole again. Five STARS for Finian.....BUT

I got the pajama bottoms as well and the material is terrible. The print and concept is cute but there's no way I could wear them. I can only describe the material as being like lycra. You would sweat like crazy in them, they are unbreathable, really cheap polyester and disappointing. So with that, I am taking off one STAR. 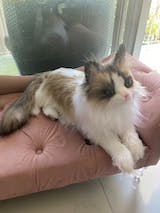 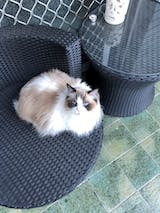 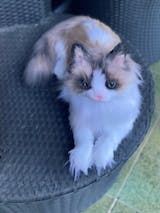 N
N.Z.
We missed you

Tragically we lost our little Sid in January of this year. It left all of us with a hole in our hearts. After hearing about cuddle clones I had to check it out for myself. I put together the order of Sid and waited. I was so nervous that what I got in the mail would look like a gremlin rather than my baby boy, but I was in tears when my package finally arrived! It looks so much like Sid it scares me sometimes. We have him sitting in his favorite chair in my living room and every time we pass by we swear he’s sitting there. Cuddle clones did a fantastic job! 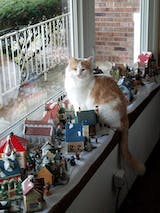 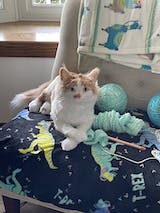 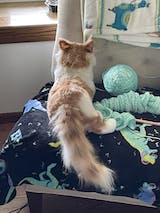 Words cannot express how much I adore my clone. It looks exactly how I thought it would. Obviously its not exact but im so in love. Even came a few weeks earlier than expected. I want to thank everyone involved. Customer service was awesome. Also i just cant get enough of the way it sits just like my baby! I love it! Thank you! 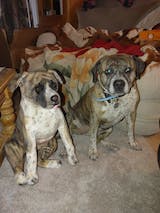 My Pile and Bandit are together again. Losing both within a month of each other was very difficult. I received Cuddle Pile from my family for Christmas and I purchased cuddle Bandit a couple months ago and could not be happier with the results from both. Your artist are phenomenal!

Getting one of my best friend who passed earlier this year has helped me cope with that loss. The details are amazing and so accurate to the pictures. 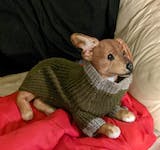 Turn your favorite buddy into one of our most loved products in a matter of minutes.

Feel the love of your pet down to your toes!

Buy a mask = Feed a shelter pet. A portion of every purchase goes toward shelter animals in need!

Wrap yourself in the loving image of your furry best friend!

You’ll be the top dog or cat in the clubhouse!

Adding to your cart...

You will receive a new password link via email.

Get My 10% Off
No thanks, I despise coupons!

Please review your selections below to make sure everything is correct before adding to cart!

Crop
zoom in
zoom out
Zoom

We want your product to look great. Please review the following before ordering:

Your Item(s) were
added to the cart

Select image to add to The Original Plush Cuddle Clone

Crop tool: Move this image by clicking and dragging to desired position, and adjust zoom with slider below image.